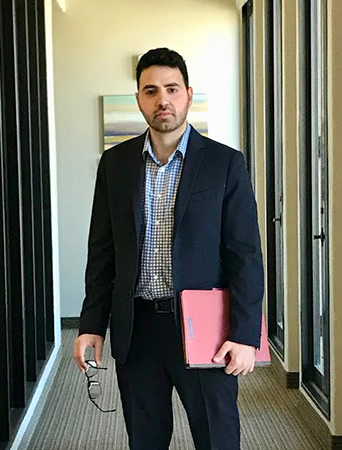 Mr. Rostomyan's exposure to the legal field began much before he actually started practicing as an attorney.  While still in law school, Mr. Rostomyan completed an externship at the United States District Court for the Central District of California, for the Honorable Fernando M. Olguin. Mr. Rostomyan completed internships for the Los Angeles District Attorney's Office and the Glendale City Attorney's Office, working side-by-side and learning from some of the most talented and experienced litigators.

While attending UC Berkeley School of Law (Boalt Hall), Mr. Rostomyan served as an associate editor for the Berkeley Law Technology Law Journal.  Mr. Rostomyan is a recipient of the Elizabeth E. Cabraser Scholarship Award for academic achievements at Berkeley Law and great promise as a future leader in the legal profession.  Mr. Rostomyan obtained his Bachelor's degree from the University of California, Los Angeles (UCLA), where he was again a scholarship recipient for High Achievement and Outstanding Promise.

Mr. Rostomyan received extensive training in trial work and served as a first chair trial attorney for at least a handful of jury trials. The jury often times expressed an opinion that Mr. Rostomyan was able to deliver complex and difficult content in simple and straightforward manner. This helps Mr. Rostomyan in his day-to-day practice when speaking with clients, witnesses, and experts. After serving the public, Mr. Rostomyan began building the infrastructure for Rostomyan Law but also worked for a high profile attorney, Mr. Donald Etra, assisting him with law and motion for very important cases, as well as preparing for trial and serving as a second-chair trial attorney.

Mr. Rostomyan prides himself for starting Rostomyan Law, PC, where he is able to use his education, talent and experience for ordinary folks who need skilled and quality legal representation.